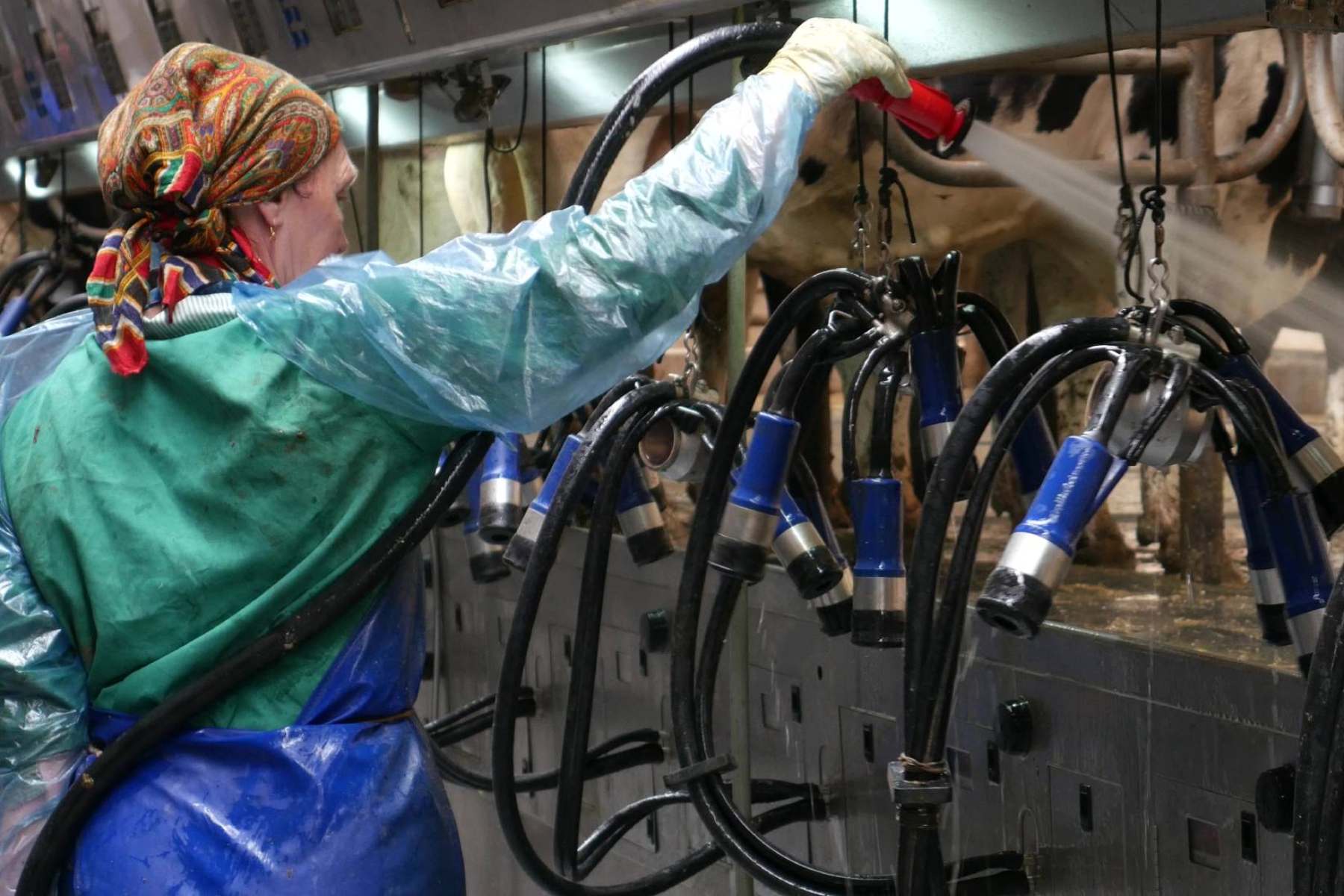 The time interval between milking is one of the most important factors in the milk production of cows. It is important for a farm owner not only to track how many times a cow is milked during the day and how long it takes between milking, but also how to optimize these parameters to maximize milk yield.

The milking schedule is not the same for all cows in a herd and depends on the breed, animal health, number of days of milking and other parameters.

When developing a milking schedule, it must be borne in mind that the greatest amount of milk is obtained when the udder of the cow is sufficiently filled with milk. However, if the udder is too full and the pressure is high, the cow becomes uncomfortable and milk production decreases. Typically, a slowdown in milk production occurs 12-14 hours after milking, depending on the productive characteristics of the breed of cows.

Considering the above, the cow should be milked at least 2 times a day. Ideal, which maximizes milk yield and is used in most dairy farms three times a day, that is, every 8 hours. Sometimes, taking into account seasonality and night time, a 12-6-6 hour scheme is used.

It is important to keep track of the start time of milking and the amount of milk in order to understand how milk yield changes when the milking schedule is adjusted.

Let us consider, using the example of farms, how changing the milking intervals affects milk yield. 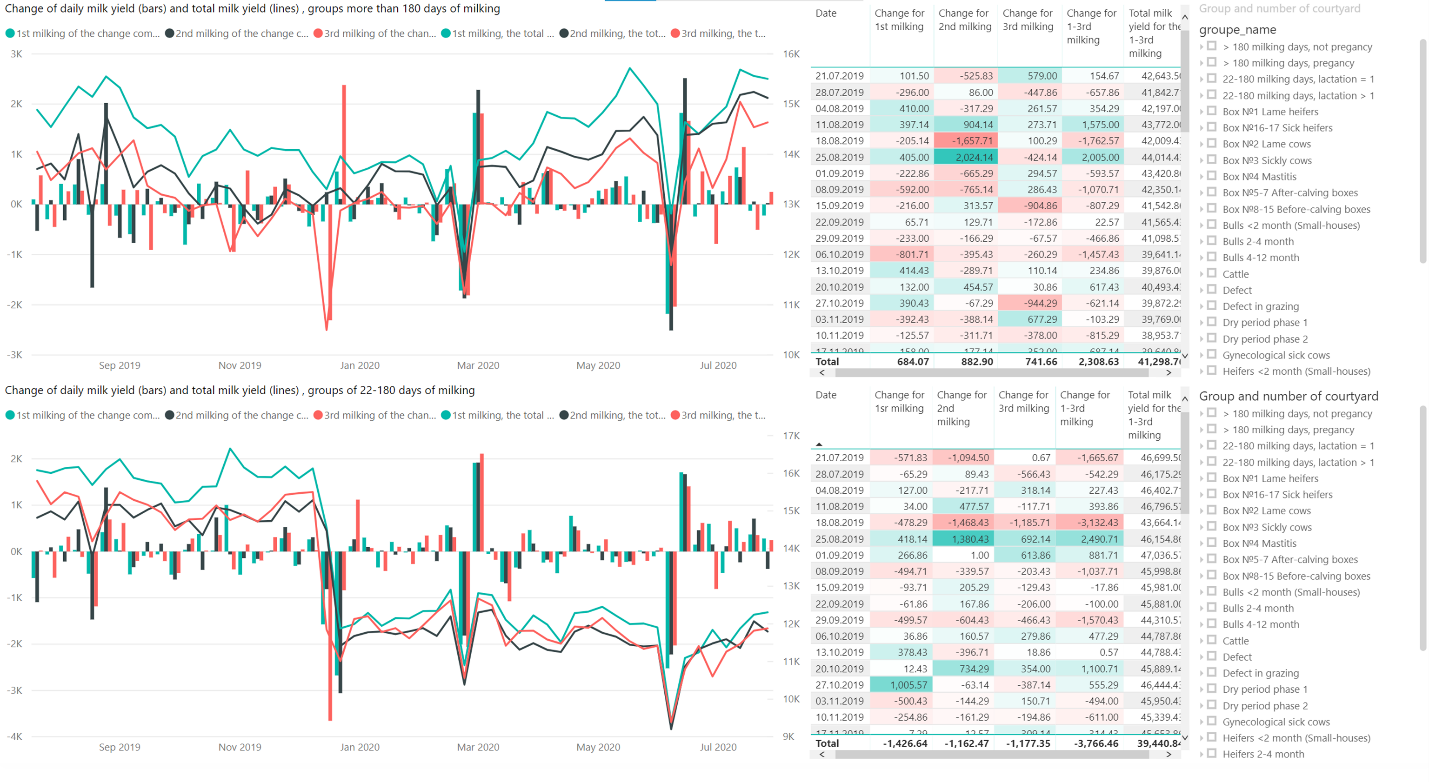 The screenshot from Dairy Production Analytics above shows a real-life situation at a dairy farm. At the top of the screen, analytics are shown for cows milking over 180 days. The lower part contains information on cows milking 22-180 days. On the right side of the graph there is additional filtering depending on the signs: pregnancy, lactation, mastitis, veterinary procedures and other parameters.

The farm produces 3 milkings per day. On the graph, the bars indicate the deviations of milk yield from the values ​​of the previous period for each of the three milkings, the curve shows the total milk yield for milkings in the period. It is clearly seen that the bars below the line indicate milk loss, and the bars above the line indicate positive deviations. The numerical values ​​of deviations separately for milkings, per day and the total deviation are presented to the right of the graph in the table.

The less fluctuations on the graph - the more efficiently the milking schedule is built and observed. Large deviations, both positive and negative, indicate non-observance of the milking intervals, which entailed these changes.

This example is interesting in that the cows that are in the milking group for more than 180 days showed a positive dynamics of milk yield and produced 2308 kg more than in the previous similar period. Cows that are in the group of 22-180 days, which means they had the prerequisites for an increase in milk yield, on the contrary, showed negative dynamics and produced 3766 kg of milk less than in the previous similar period. Thus, the aggregate result of the economy also turned out to be negative.

The graph shows that negative deviations in milk yield began in December 2019, and in this example, this is due to the fact that the milking schedule was changed on the farm on the advice of a consultant. Thanks to the Dairy Production Analytics report, we see that the system proposed by the consultant turned out to be impractical and needs to be adjusted.

This report is also related to the notification function. Dairy Production Analytics monitors compliance with milking times and, when deviated by 30 minutes, sends a violation notification that allows you to quickly take corrective action.

Of course, in addition to the intervals between milking, other factors affect the change in milk yield:

With Dairy Production Analytics, you can quickly see changes, find the reasons for the changes and make decisions to maximize milk production.